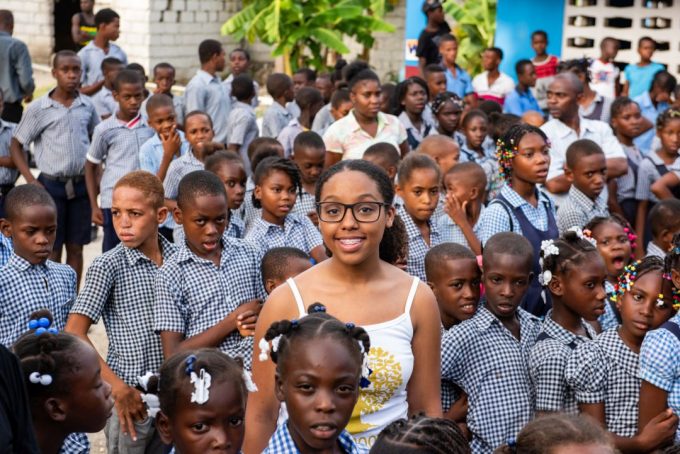 The GrassROOTS Team traveled to Haiti on June 15th for the #WhatOrphansWant social action initiative by SuperGirl Olivia Raymond. The trip followed the What Orphans Want Benefit Concert just a week prior, which raised $12,000 to grant the wishes of youth in Haiti. $5,000 of the dollars raised was donated to Child Hope International, an orphanage located in Port-au-Prince. The remaining dollars were spent on granting the individual wishes of children at the Love in Action School in Guirand.

The 15 person GrassROOTS team that flew to Haiti via Jet Blue consisted of SuperGirls Olivia Raymond and Marley Dias; caregiver and SuperGirls Society  (SGS) Director, Sherille Raymond; GrassROOTS Board members, Lisa Maxwell and Dr. Janice Johnson Dias; and community partner Icema Gibbs and her family. Our special guest and liaison was former SuperMom Balanda Atis and adopted daughter and former SuperGirl Jade (who was once an orphan in Haiti).  Andrea Ciprianni Mecchi photojournaled the entire trip.

The team arrived without incident despite the high threat warnings issued by the U.S. Embassy.  “We arrived in Port Au Prince and went directly to our first destination – an orphanage named Child Hope International where we donated $5,000. We met with the administrators to learn more about the orphanage and their extraordinary efforts to reunite children with their parents,” said SuperGirl Olivia Raymond. “One of the best parts was actually meeting with the boys and girls who live at the orphanage. Many were brothers and sisters, and they ranged in age from 8 to 15 years old,” Olivia continued. The boys and girls wrote kind letters to SuperGirl Olivia and read these letters of thanks aloud.  After the presentation, the GrassROOTS team spent quality time with the children and were given a tour of their living quarters. The donated dollars will be used for academic and social services, including the efforts to reunify youth with their families.

On Day 2 of the trip, we drove three hours south of Port-au-Prince to the rural arae of Guirand. On this drive, there were stunning sights of the striking mountains and lush landscapes. Olivia observed, “ But all too often we looked outside and saw children digging in trash filled ditches, families bathing in water holes, and kids walking around with shoes in disrepair or no shoes at all. This drive gave me a first hand overview of the harsh economic reality in Haiti. This experience also gave me a greater sense of gratitude for the things I have.” It also gave each person on the trip a deep appreciation for the resilence of the Haitian people, for despite the context residents were engaged in the daily routines of their lives. Children were going to school. Adults were going to work.

In Guirand we went to the Love and Action School. We were greeted with great applause and songs from the students. “We then made the very naming of my social action project a reality. We distributed the individual gifts to the children.  These gifts included phones, toy cars, bikes, a laptop, shoes, backpacks, and money for the medical needs of a girl with heart problems. We were even able to provide a cow and three goats,” said Olivia.  Seeing the excitement on all of these kids’ faces filled the hearts of each person with joy. For SuperGirl Olivia it was a full circle moment. She had accomplished what she set out to do: fulfill the wishes of children.

Check out our photos of the trip.