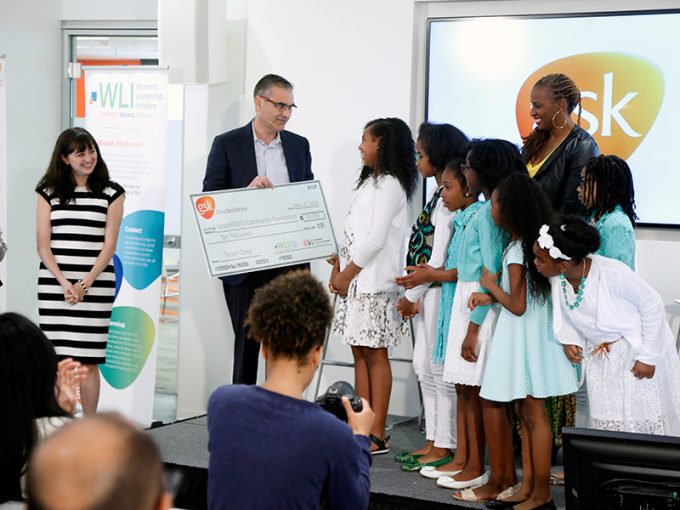 Since the inaugural year of SuperCamp in 2011, GSK Consumer Healthcare has been a foundational investor in the GrassROOTS Community Foundation (GCF). That investment has continued till today. Whether through fiscal donations by individual employees, professional development from GSK volunteers and grants sponsored by the Women Leadership Initiative and the African American Alliance, GSK has contributed significantly to the pipeline of girl leaders. The returns on investment have now begun to bear fruit and we could not have flourished without this essential support.

Further, healthcare is slated to be the largest employer over the next two decades.

As a training institution, GrassROOTS has chosen to tackle the issue of girl leadership head on. In response to the aforementioned gap, the GrassROOTS Community Foundation has developed the one of a kind training experience to develop a pipeline of girl leaders across the full academic spectrum: elementary school, middle school, high school and college girls. We connect these girls with leading women executives who offer strategies for how girls can succeed in today’s fastest growing industries. Research tells us that mentorship and models can help girls and women achieve success in their chosen fields (Evans and Herr, 1991). We construct models to help our girls Think F.A.S.T.E.R: Girls succeeding in Finance, Arts, Science, Technology, Engineering and Research.

With GSK’s support we have developed a robust and comprehensive year-round leadership training program: SuperGirls Society which includes a summer intensive component titled SuperCamp. Within this program, we have also trained middle school girls on the ways in which the healthcare industry operates from behavioral health to health policy.  https://youtu.be/WH86b4jhhuI

GSK has also been instrumental in the development of professional development and mentoring program for high school girls. For the past three years, we have held convenings focused on equipping girls with the knowledge and skills to succeed in business. These program called Think FAST and Think FASTER is organized for girls, by girls. GCF train girls  moderate all panels; girls produce all content as media team technicians; and girls engage one-on-one with top women executives.

It was GSK’s investment in 2011 that inspired our girls to think big. The 5-year olds who visited the ABREVA shoot have all been so deeply influenced. Now as teens, they are leading initiatives that will impact their communities and the world.

The seeds were planted in July 2011 and they continue to grow.

Thank you GSK for choosing to #investingirls